Persian Fruits and Nuts
Persian Dried fruit is a fruit which the majority of the original water content has been, removed either naturally, through sun drying, or through the use of specialized dryers (heated wind tunnel dryers) or...
0 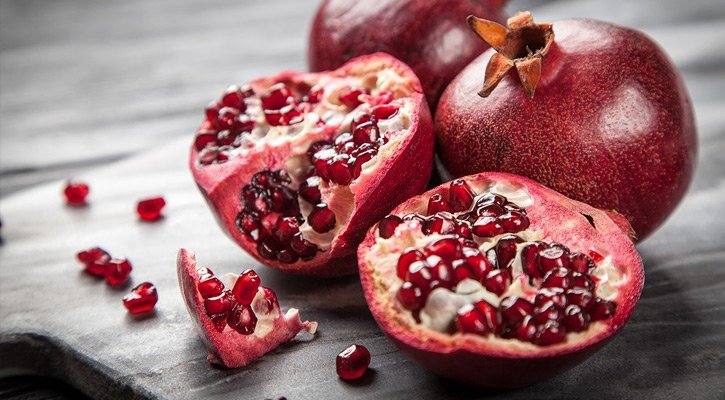 Persian Dried fruit is a fruit which the majority of the original water content has been, removed either naturally, through sun drying, or through the use of specialized dryers (heated wind tunnel dryers) or dehydrators. Dried fruits retain most of the nutritional value of fresh fruits. 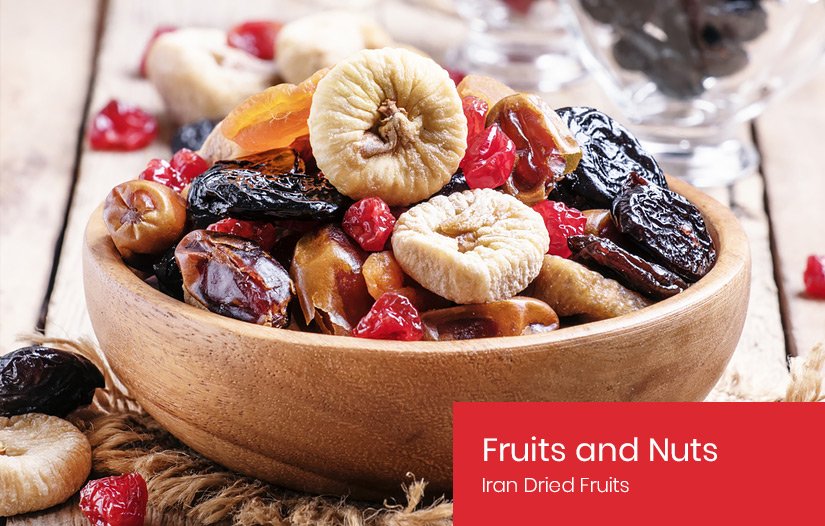 Persian Dried fruit is a fruit which the majority of the original water content has been, removed either naturally, through sun drying, or through the use of specialized dryers (heated wind tunnel dryers) or dehydrators. Dried fruits retain most of the nutritional value of fresh fruits. The specific nutrient content of the different dried fruits reflects their fresh counterpart and the processing method.

Persian dried fruits are also important sources of vitamins, minerals and fiber and provide a wide array of bioactive components. Some are infused with a sweetener (for example: sucrose syrup) prior to drying. Some are candied fruit. And some are simply sold as dried fruit.

By drying the grapes under the sun or with the help of other techniques Raisins are produced. Raisins have a sweet taste with a wrinkled texture. In ancient times, raisins were used as a sweetener or for treating illnesses.

Iranian Raisins are one of the most nutritious dried fruits in the world. Raisins are a great source of iron and also contain vitamin A and vitamin B, minerals such as potassium and calcium. Raisins are cholesterol free and rich in fiber and antioxidants.

Raisins are mostly dried by the sun and through natural process but some of them are also dried via mechanical devices. Iran is the third largest producer of raisin in the world.

When the grapes are dried, the water from the grapes evaporates. The heat also causes the sugar in grapes to caramelize.

Golden Raisins are from seedless grapes. To preserve their Golden color, these raisins are oven-dried (artificial heat) and sulfur dioxide is added to them. Sun drying these seedless grapes would darken the color.

Sultana Raisins are dried white grapes. Sultana raisins are very sweet and their flavor is compared to honey. Some sultana raisin producers coat the grapes in vegetable oil before drying them. These raisins are specifically used in bakery for baking bread.

Kashmar Raisins or as some people call it, long raisins are local raisins from Iran (Kashmar is a city in Khorasan Razavi province).

The main difference between golden raisins and Kashmar raisins is in the percentage of the sulfur used in the production process. These raisins have a mix of sweet and sour flavor.

Black raisins have a very sweet taste and a juicy flavor. These raisins are sun dried that is why the color is darker. Also these types of raisins have no additives.

Apricots are orange colored summer fruits. They are small, yellow-orange to pink-orange and are soft and smooth. Apricot trees need cold weather to bear and grow properly in Mediterranean climate locations. Apricots are rich in antioxidants and potassium and are great source of vitamin A and vitamin C. Dried apricots contain Vitamin K that is required for blood clotting.

Dried apricots are also good source of fiber which treats constipation and helps to have healthy bowels.

Apricots ripen in the early summer but by drying them, Iranians eat this sweet and tasty fruit in their parties throughout the year, especially Yalda night. Iran is one of the top producers of apricot in the world. Apricots were planted in ancient Persia.

Dates are oval-shaped, brown or reddish-yellow, sweet fruits. Date palm is one of the most ancient cultivated trees in the world from ancient times. Dates are believed to be a complete diet because they are full of different type of vitamins, minerals and significant amount of fiber.

Iran is one of the biggest exporters of dates in the world!

Date palms are common in warm zones of Iran.

Iran produces about 950,000 metric tons of dates every year.

Persian dates have different attributes and degree of color which each of them are used differently.

Persian dates are used for making breads, pastries and snacks. Dates are often used in Persian Cuisine. Adas polow, a famous Iranian dish is served with dates as well as raisins in the form of topping. Dates are the main ingredients in many Persian cuisines, especially in southern areas of Iran. Just to name a few: Komaj is sweet date bread with turmeric and cumin, Kolompe is a type of Iranian pie made of dates and cardamom.

Pomegranate is a juicy fruit with reddish color skin and many red arils inside. The skin of the pomegranate is thick and inedible. Its season typically runs from October through February. Pomegranate is one of the few foods that contain natural aromatase which can reduce breast cancer risk drastically.

Researches show that drinking pomegranate juice reduces oxidative stress considerably. They are a good source of fiber as well as vitamins A, C, some B vitamins and minerals such as calcium, potassium and iron. The antioxidants in the pomegranate juice are believed to stop the progress of Alzheimer disease and boost memory.

Pomegranate juice is also the most heart-healthy juice and protects the heart and arteries. Different parts of the Pomegranate tree, the roots, the reddish brown bark, leaves, flowers, rind and seeds, have been featured and used in medicine for thousands of years.

Pomegranate is the original fruit of the central Iranian plateau. Pomegranate is also one of the most ancient fruit trees to be grown.

It is also said that Pomegranate trees were in the Hanging Gardens of Babylon.

Iran is the largest pomegranate producer and exporter in the world. In Persian culture and belief, pomegranate is believed to be a sacred fruit and a fruit originated from paradise. Because of its many seeds, the pomegranate has long stood as a symbol for fertility. Pomegranate is used in many Persian dishes such as Fesenjun. 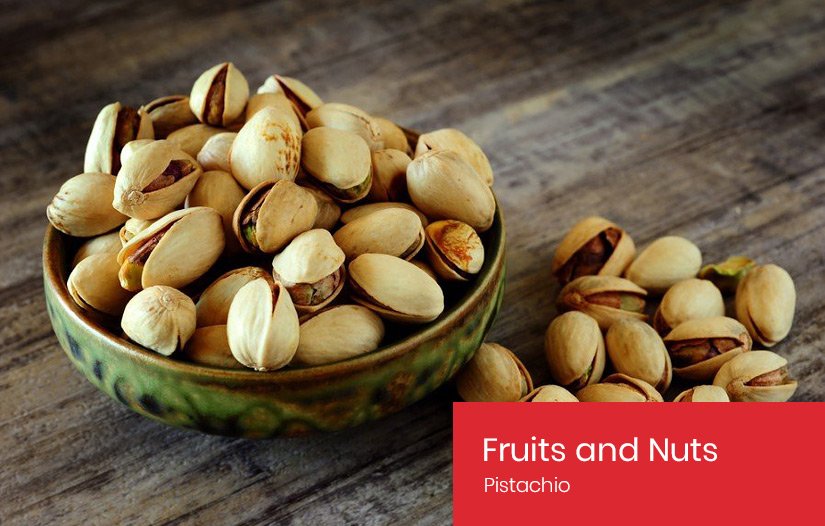 Iranian Pistachios or “Pesteh” in Farsi are known worldwide!

Iranian Pistachios have top notch quality and unrivalled taste. Pistachios are a good source of unsaturated fatty acids and numerous antioxidants, including tocopherol, carotene, lutein, selenium, flavonoids, and phytoestrogens. The fiber in pistachios aids digestion and prevents constipation. Compared with other commonly consumed nuts, pistachios are the richest source of phytosterols. Pistachios can also help fight conditions such as anemia because it increases the hemoglobin count and blood flow.

Pistachios are used in deserts such as Gaz, Sohan, famous Saffron Ice cream and Persian food and dishes especially for decoration.

Iran is the biggest producer and exporter of pistachio with a production of more than 113,000 MT (over half the global pistachio production). Iranian pistachios also have the best taste and quality among other pistachio producing countries like the United States and Turkey.

Walnut is a round, single-seeded stone shaped fruit, consisting of two halves which are enclosed in a green fruit. Walnuts (Juglans regia) are a tree nut belonging to the walnut family.

Walnuts are an exceptionally nutritious nut. Eating walnuts help you to control your appetite which would lead to your weight loss. Walnuts contain higher antioxidant than any other nut.

Walnuts are rich in the polyphenol ellagitannins that can protect you against colorectal cancer and also decreases the risk of other cancers. High blood pressure is a major risk factor for heart disease and stroke and eating walnuts lowers the blood pressure significantly. Studies show that eating walnuts improve brain function, processing speed, boosts the memory and prevent Alzheimer.

Walnut oil is an excellent source of omega-3 fatty acids which is made from nuts that are dried and then cold-pressed. Walnut oil can be applied on the skin which has an anti-aging effect. They also can be applied directly to hair to make it look smooth and glossy.

Persian walnuts are the most popular type of walnut in the world. Walnut is the main ingredient of the famous Persian stew, Fesenjun. They are added in different sweets and cookies as well.

Almond is an oval shape nut in a woody shell and is usually cultivated in warm climates. Almonds are actually the edible seeds of Prunus dulcis that is more commonly known as the almond tree. They can be consumed either toasted or raw. They are also available sliced, flaked, slivered, as flour, oil, butter, or milk (almond milk).

Almonds are good source of vitamins, minerals, protein and fiber. They are rich in vitamin E, calcium, magnesium and potassium and protein. Almonds decrease the blood sugar and are rich in antioxidants. They also reduce blood pressure and lower the cholesterol level.

Nuts such as almond are beneficial for losing weight. The fiber, protein and fat in the almond control your appetite.

Almond oil is one of the best oils for hair and skin care. It is mild and hypoallergenic oil so it is safe even for sensitive skin, including baby skin. If applied under your eyes, it would remove dark circles and brighten your skin. Almond oil can also delay signs of aging because it renews the cells on your skin.

Iran is one of the biggest producers of Almond – due to its Mediterranean weather!

Almond is cultivated in many different countries but the Persian Almond has the best quality and taste. Almonds had a significant role in Iran’s agriculture and cuisine in ancient times.

Tangerine is a small citrus fruit with a loose skin and orange color. Even though tangerines and oranges are closely related, they are actually two separate fruits with notable differences.

Tangerine fruit trees are smaller in size as compared to orange trees, and the fruit has a deep orange color with a flat shape. Tangerines are known for their fresh and citrus taste and high nutrition. They are packed with many nutritious compounds such as flavonoids, vitamin C, vitamin A, folate and potassium. According to ancient medicine, eating tangerine would control body temperature and prevent cold. It also accelerates the process of healing minor cuts and wounds.

Siahoo tangerine from Bandar Abbas in Iran has been registered internationally by the World Intellectual Property Organization (WIPO) which has resulted in it being further known by people in different countries around the world. Siahoo is a village in southern parts of city of Bandar Abbas. Because of its unique climate, tropical and cold-season plants and fruit grow beside each other, such as walnuts, pomegranates, grapes, apricots, apples, mangoes, tangerines and different types of citrus fruits and palm trees. 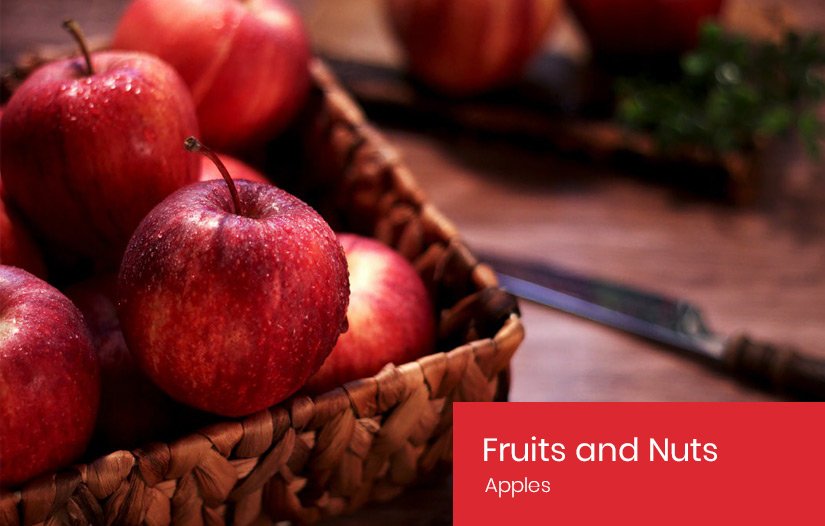 Apples are most cultivated and consumed fruits and among the most popular types of fruit in the world. They are the fruit of the apple tree also known as Malus domestica; and are originally from Central Asia. Nowadays Apples are grown all over the world. The apples produced in Iran have various shapes and colors.

Eating and chewing apples stimulates the production of saliva in the mouth which as a result lowers the levels of bacteria and reduces tooth decay. Apples increase bone density and bone strength. Scientists believe eating apple can protect you against osteoporosis and an increased risk of fractures. The phytonutrients and antioxidants in apples would reduce the risk of cancer, hypertension, diabetes, and heart disease.

Red apples contain an antioxidant called quercetin which can boost and fortify your immune system, especially if you are anxious or stressed out. Eating apple also prevents developing type 2 of diabetes, because apples are full of soluble fiber which is the key to lowering blood sugar.