Persian Customs and Traditions
Iran is an ancient country with a long history so it’s no surprise that Iranians have different customs and traditions.
0

“Persian Customs & Traditions” & (How) to Celebrate Them?

Iran is an ancient country with a long history so it’s no surprise that Iranians have different customs and traditions. Iranians celebrate the longest night of the year known as Yalda or “Shabe Chelle” (Night of Forty).

Yalda (after Norooz) is one the most ancient Persian tradition and celebration.

Iran is an ancient country with a long history so it’s no surprise that Iranians have different customs and traditions which is explained in details in this post. 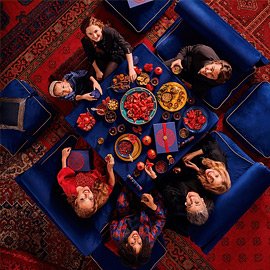 Iranians celebrate the longest night of the year known as Yalda or “Shabe Chelle” (Night of Forty). Yalda (after Norooz) is one the most ancient Persian tradition and celebration.

On the eve of the first day of winter known as the “winter solstice” (December 21), Iranians celebrate by gathering with their family and friends and staying awake all night. Yalda’s origin like most of Persian traditions goes back to Zoroastrian era.

Ancient Persians thought that evil forces were present on Yalda and that the next day the Lord of Wisdom, Ahura Mazda was present. It was considered the victory of light over darkness after longest night of the year.

The next day, which is the first day of the month ‘Dey’ is known as ‘khorram rooz’ or ‘khore rooz’ meaning the day of the sun.

On Yalda night, everyone gathers around “Korsi” and the oldest member of the family reads “Divan Hafez” (Hafez’ poems collection). It’s a Persian tradition that each member of the family makes a wish and then opens Divan Hafez, and base on the poem they see they interpret if their wish will come true. Like any other Persian celebration, food plays an important role.

The night is spent by eating dried fruits such as apricot and different nights like walnut, pistachio and almond; and fruits such as pomegranate, watermelon and Persimmons. Ancient Persians believed the ones that begin their winter by eating summer fruits like watermelon, would not get sick during the winter.

Yalda is celebrated in other countries such as Azerbaijan, Afghanistan, Iraq (by Kurds of Iraq), Tajikistan and Turkey (by Kurds of Turkey).

Korsi: In the old times when there was no electricity, Iranians used korsi to keep their houses warm. Korsi is basically a low height table with a brazier containing hot coals underneath and then the table is covered with a large blanket. Narrow mattresses and backrests were placed around it to sit or sleep.

Korsi used to bring family members together; they spent the time under korsi chatting, joking.  Usually a round platter is placed over korsi and different fruits and nuts are put in it. 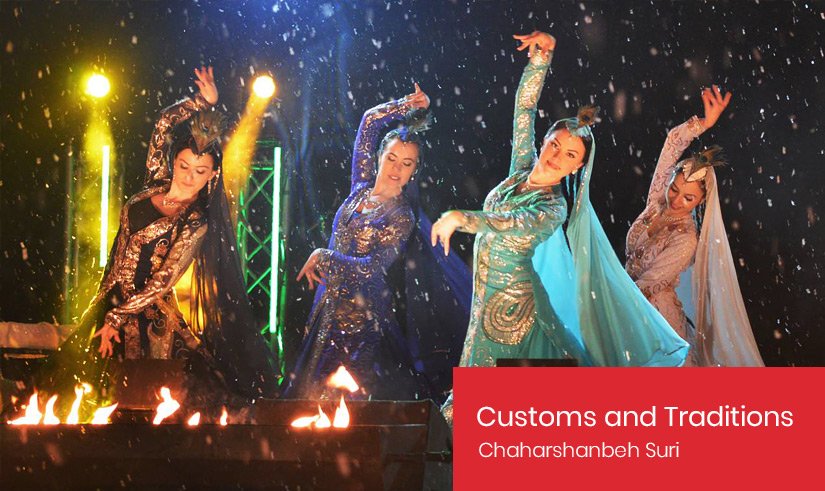 Chaharshanbeh Suri is celebrated on the eve of last Wednesday of the year in Persian Calendar. This tradition again like most Zoroastrian traditions is the celebration of the victory of light (the good) over the darkness (the bad).

Jumping over fire: On this day Iranians make bonfires on street or their backyard and sing a song:

“Your fiery red color is mine and my sickly yellow paleness is yours. This is a purification rite and ‘suri’ itself means red and fiery.”

Cooking and Serving Ash e Reshteh: It’s a tradition to cook Ash e Reshteh (Noodle and Bean Soup) and give it to their neighbors. This soup is made with reshteh (Iranian noodles), onion, chickpeas, pinto beans, lentils and different herbs.

Ajil e Moshkel Gosha: Another tradition on this day is serving different kinds of pastry and nuts known as Ajil e Moshkel Gosha. Ajil e Moshkel Gosha literally means problem-solving nuts and is way of thanks giving for the previous year’s health and happiness, while exchanging any remaining paleness and evil for the warmth and vibrancy of the fire. The Ajil consists of pistachios, roasted chick peas, almond, hazelnuts, figs, apricots, and raisins.

Ghashogh Zani: Ghashogh Zani or spoon beating is an Iranian version of Trick or Treat in which children or youngsters cover their face and knock on people’s door while banging on pots and pans they have with spoon. They in return expect the host to give them snacks such as nuts or chocolate.

People used to make different wishes for new year for example marriage or wealth; then they would stand at the corner of an alley or hide behind the walls and listen to conversation of strangers on the street. If they heard anything positive and optimistic in the conversation, they take that as a good luck and believe their wish will come true. If negative words were mention, they would interpret that they won’t reach their goals and their wishes wouldn’t come true. This tradition is not common in big cities because eavesdropping is considered rude.

The house cleaning customs of Norroz symbolizes the removal of evil spirit (Ahriman) from home and preparing a clean home to welcome the spirits of their loved ones who had passed away. Every member of the family even the kids, help with the spring cleaning. They wash everything from Persian rugs, curtains, walls and floor to vessels and clothes.

Iranians also start getting rid of old and unnecessary items either by throwing away or donating them to the local charity or people in need.

Haft Seen: Setting Haft Seen or Haft Sin is another ancient Persian tradition that everyone in Iran follows.

“Haft” is seven in Farsi and “Seen” is the S in Persian alphabet and it basically means arranging seven symbolic items starting with S. The Haft Seen table includes:

Other items included in Haft Seen are:

During Nowruz it’s a custom for Iranians to visit their relative. Usually on the first day Iranians must go to the grandparents’ house as a way to pay respect. Grandparents then would give their grandchildren gifts mostly bank notes. The newly wed couples are supposed to visit their parents first thing on New Year’s Day. They are also visited by other relatives since it is their first Nowruz as a couple.

Sizdah Bedar: On the thirteenth day of the Persian New Year festival, Iranians leave their house and go out in order to enjoy the nature. Most Iranians pack picnic bag and head to parks or the countryside.

Sizdah bedar means passing the thirteenth because the number thirteen is considered to cause bad luck so people go out to pass the bad luck associated with the number thirteen. Iranians also discard the sabzeh grass from the Haft Seen table into running water because they believe it has collected all the bad fortune and evil energy of a family during Nowruz.

It is also a tradition for young single member of the families especially women to tie the leaves of the sabzeh before discarding it and making a wish to be married before the next year’s Sizdah Bedar.

Another tradition associated with this day is Doroogh-e Sizdah, literally meaning “the lie of the thirteenth”, which is the process of lying to someone and making them believe it or pranking them (similar to April Fools’ Day).

Tirgan is an ancient Persian festival during summer. It is rooted back to ancient Persian and is celebrated on 13th of Tir, the fourth month of Persian calendar (early July).

Tirgan festival also known as water festival is celebrated by different activities such as water splashing, eating and serving special food and also singing and dancing. This festival is still celebrated in various parts of Iran such as Mazandaran, Kerman and Yazd.

The legend behind Tirgan is that at the time of war between Iran and Turan, the two countries decide to make peace. Both sides reach an agreement that an arrow must be shot and wherever it lands will be marked as the border of Iran and Turan. Arash the Archer (Iranian hero) was chosen to make the shot.

It is said that Arash stood on top of the Damavand Mountain and Shot the arrow (Tir in Farsi) with a force that the arrow flew through the sky for hours and hours marking the future border between the Iran and Turan. And finally the arroow landed under a walnut tree. Legend has it Arash was destroyed by the force of the shot and disappeared. 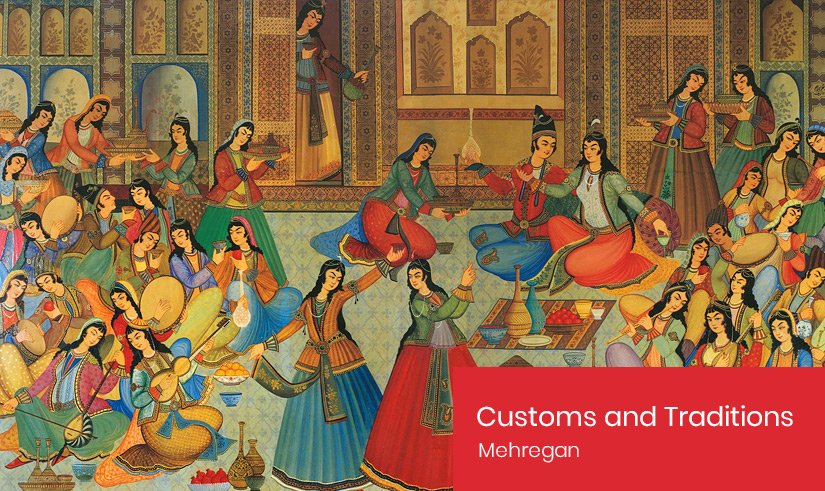 Mehregan after Nowruz was considered the most important Persian celebration and is one of the greatest Iranian festivals.

In ancient Persia, Persians used to divide the year into two main seasons summer and winter. The start of each season was celebrated. Beginning of the summer which was Nowruz or Persian New Year and the beginning of winter celebration was Mehregan. The name comes from the first month of autumn in Farsi.

The word “Mehr” in Farsi language means kindness. Mehragan was celebrated on the 16th of Mehr and was celebrated for six days ending on the 21th of Mehr. Nowadays Zoroastrians especially in Yazd and Kerman celebrate Mehregan.

They set up a table like Haft Seen for Nowruz and decorate it with different type of flowers. The items in the Mehregan table are: pomegranate, bergamot, apple, Persian olive, quince, white grape, fig, jujube, hawthorn, medlar, and persimmon and various nuts like walnut, pistachios, hazelnut, almond, sunflower seed, dried white mulberry, dried fig, chickpea, and so on. As Mehr was the month that farmers harvested their crops, different cereals such as wheat, barley, lentil, rice and others are included in this table.

Saddeh is also known as fire festival. The date of celebrating it is 10th Bahman (Eleventh month in Persian calendar which is the 30th of January. Sadeh is an ancient Persian festival which was largely celebrated when Zoroastrianism was the dominant religion, before the conquest of Islam in the 7th century.

This festival is named after the number one hundred in Farsi (Sad). It is believed that the name was chosen because there are 50 days and 50 nights before Nowruz (Persian New Year).

The nights are counted because on this day the fire was discovered and the celebration honors the victory of fire over darkness and cold. The legend behind this festival is that Houshang who was the second king on earth, discovered fire by accident when he wanted to throw a stone at a dragon but the stone hit another flint stone which caused a spark that generated fire.