Persian Food
“Persian Food” & (The Art of Cooking) in Persian Culture Persian cuisine consists of modern and traditional cooking methods. Rice & Bread are the main part of every Persian meal which is consumed with meat and vegetable dishes along with…
0 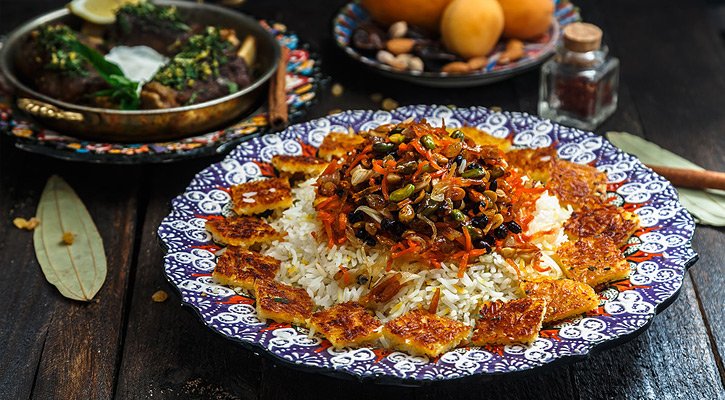 “Persian Food” & (The Art of Cooking) in Persian Culture

Rice & Bread are the main part of every Persian meal which is consumed with meat and vegetable dishes along with yogurt.

Iranians have a variety of different breads (Naan) which are thinner compared to other countries and most of them are flat.

Persian food and cuisine are some of the most delicious and fresh in the entire world!

The culinary methods and styles used in Iran are completely unique, though we can’t deny that our style has been influenced by our neighbor countries. But we can say that we have also influenced our neighbors, no less if not more. These effects have helped improve both sides’ styles throughout history.

Persian food and cuisine are some of the most delicious and fresh in the entire world. Rice and bread are the main part of every Persian meal which is consumed with meat and vegetable dishes along with yogurt.

Iranians have a variety of different breads (Naan) which are thinner compared to other countries and most of them are flat.

Many Persian dishes have some kind of sour flavour that is achieved through the addition of dried lemon (limo amani), pomegranate or sour oranges.

Unlike many countries, the dishes in Iran have fruits like pomegranates, quince, prunes, apricots and different sorts of fresh green herbs such as Ja’faree (Parsley), Reyhaan (Basil), etc. alongside them as accompaniments.

Another unique aspect of Iranian cuisine is the spices and additives. For example saffron, cinnamon, Fennel, clove, and so on. These spices add characteristically particular tastes and flavors to the food that are mostly specific to Iranian dishes.

Iranian cuisine is not limited to one or two sorts of food. Here are some of the more known styles and classic dishes:

There are a lot of different types of Kebabs in Iran:

Koubideh or Koobide is one of them which is basically ground meat seasoned with minced onion, salt and pepper.

Joojeh (Chicken) is traditionally made from a whole chicken marinated in lemon and onion, and basted with saffron and butter.

Kebab Barg is thinly sliced lamb or beef, flavored with lemon juice and onion and basted with saffron and butter.

Chenjeh is pieces of lamb or beef fillet that are grilled.

Shishleek or Shishlik is Persian lamb chop served with saffron rice, grilled tomatoes and is usually cooked on a charcoal barbecue.

khoresht is a sort of stew that is served with white Iranian rice: ghormeh sabzi, gheimeh, fesenjān, and others),

There are various types of Khoresht (stew) in Iran:

Ghormeh Sabzi (Green Herb Stew) is one of most famous dishes of Persian cuisine and is made of herbs, kidney beans and lamb. Ghormeh Sabzi is seasoned with dried limes, limou amani in Farsi. Dried limes are extra intense and sour. The herbs in this stew are parsley, coriander and scallions.

Gheymeh (Yellow Split Peas Stew) is made of meat that is cut into cubes (gheymeh), french fries and is served with white rice.

Khoresht Fesenjan (Pomegranate Walnut Stew) is made with different methods, for example some use meatballs or chicken in this stew.

The flavor is either sweet or sour, but some cook it with a mix of sweet and sour taste. Khoresht Bademjan (Eggplant Stew) is prepared with eggplants, lamb or beef and tomatoes.

There are different types of kukus. Kuku Sabzi is a dish especially served in Norooz (Persian New Year) is made of various herbs and egg.

Kuki Sib Zamini (potato) is made of potato and egg.

white rice served alone or with the addition of meat, vegetables and herbs, including loobia polo, albaloo polo, sabzi polo, zereshk polo, baghali polo, and others)

Loobia Polo (Persian green bean rice) is a dish layered with green beans, meat, tomatoes and saffron. Albaloo polo is an Iranian dish made of rice and sour cherries usually served with chicken.

Zereshk Polo is one of the most famous dishes in Persian cuisine and is usually served in Persian weddings. It is made of Zereshk (dried barberry), Rice and Morgh (Chicken).

Baghali Polo ba Mahiche (Rice with Broad Beans and Lamb Shank) is one of the most popular dishes in Iran and is usually served in wedding ceremonies and important parties.

Adas Polow (Lentil Rice) is a combination of rice layered with lentils and is served with raisin, dates and in some cases meatballs.

A diverse variety of salads, pastries, and drinks specific to different parts of Iran. 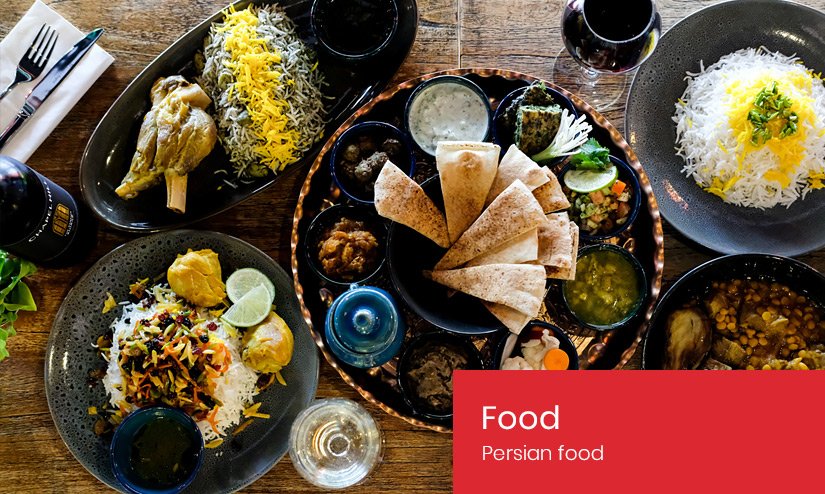 Abgoosht also known as Dizi is one of the most traditional Persian foods. Dizi was the traditional stone pot that Abgoosht was served in. Abgoosht is prepared with lamb, chickpeas, white beans, onions, potatoes, and tomatoes.

Kashke Bademjan also called kashko bademjan is one of the most popular Persian appetizers. It is a Persian eggplant dip that is made with fried eggplants, caramelized onions and Kashk.

Rice preparation is an art in Persian culture. There are varieties of dishes that are prepared with rice in Iran.

There are three main methods that are used to cook rice in Iran:

This method is cooking rice by placing it in salt and water and then letting it boil for a time. After that, the rice should be drained and then returned to the pot so that it can be steamed. When it is done, the rice should have separated grains.

A very popular example would be “Adas Polo”. The main trick is to mix the rice with your ingredients and then turning the heat to an average or minimum level and letting the ingredients cook well.

Kateh is made by cooking rice until it absorbs all the water in the pot. This type of rice is a specialty of Guilan province. You can see kateh served with many dishes in the cities of Guilan. Kateh is a soft mushy type of rice with the grains stuck to each other due to the heat.

Damy is a word in Iranian which means “steaming”. The method of cooking Damy rice is pretty much the same as the one used for making Kateh. The difference however, is that you can cook this kind of rice with other ingredients (beans, grains, vegetable) mixed within it.

Due to the heat, a golden-brown crust of rice is made at the bottom of the pot. This delicious crust is called “Tah-deeg or Tah-Dig“.

The word Tah means “bottom” in Persian and Deeg means “pot”. So as you see, the word literally tells us what it is. Tah-deeg can also be made with thin slices of bread or potato slices placed under the rice.

After rice, the varieties in producing bread from wheat are the most popular in Iranian cuisine. Iranians also use a variety of breads such as Sangak, Barbari and Lavash. There are approximately forty kinds of bread that are made with wheat.

As stated earlier, there are many kinds of wheat bread. But there are four of them which are more known throughout the country:

This bread is thin and is usually in a round shape. This bread is the most known and the most bought bread in Iran. Lavash is a thin large sheet of bread cooked inside a tanoor (traditional oven).

This bread takes its origins from Turkish lands. In Iran, the most famous city for making this bread is Tabriz. Barbari is Persian flat bread with a crisp crust and light airy texture which very thick and usually round or oval shaped.

This is a stone-baked bread. In old bakeries, when you purchase this kind of bread you can actually see small stones stuck to the bread because traditionally it is cooked on small gravel stones or pebbles in an open oven. Sangak is a triangle-shaped bread.

This bread is a lot like lavash, but it is a bit thicker. Also, the baking method is in a way that leaves small, round bumps on the bread. This bread is also round shaped.

Every Iranian province has its own traditional desserts and sweets that use different nuts and ingredients. Iranian cuisine also has a lot of special sweets and desserts.

For example, the traditional Iranian ice cream is a very popular choice. This ice cream is frozen and clotted cream.

The cream is put between two slices of waffles. Also, in Ramazan month, there are two iconic sweets specifically for the occasion: Zulbia and Bami-eh.

Iran also has a variety of drinks that are rarely found anywhere else:

Doogh: Doogh is a very popular drink exclusive to Iranian cuisine. In basic words, Doogh is yoghurt mixed with water.

Some people add roseflower and mint for added flavors. Doogh is mostly served along with Chelo Kabab.

There are a few more drinks to be named: Sekanjebin (syrup made with vinegar, mint and sugar), Aab anaar, etc.