Persian Architecture
The architecture in Achaemenid period between 550 BC and 330 BC was influenced by the Greeks, the Egyptians, and those from other provinces of the Persian Empire.
0 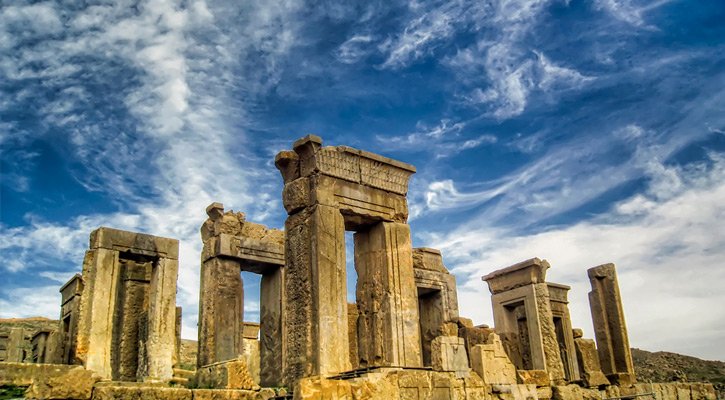 Persian architecture in Achaemenid period between 550 BC and 330 BC was influenced by the Greeks, the Egyptians, and those from other provinces of the Persian Empire. The Mongol invasions started in the 13th century, and many of the towns and art in Persia were lost as a result.

Naqshe Rustam is one of the most spectacular and eye catching ancient sites that was built during Achaemenid Empire!

Architecture work in Great Persia has a history from at least 5000 BCE but the earliest notable archaeological works of artistic value in Iran are from Achaemenid period.

Persian architecture uses symbolic geometry and pure forms such as the circle and square, and plans are based on often symmetrical layouts featuring rectangular courtyards and halls.

The early period was known for splendid ceramics from Persepolis and Susa. Large bowls and goblets were common, and 3D art became popular. The animal style art started to become popular as bronze objects dating between 1700 BC and 1200 BC became popular.

The oldest remains of architectural elements in the Iranian plateau are the Teppe Zagheh, near Qazvin. Elamite and proto-elamite buildings are also in this category.

Other extant examples of this style are Chogha zanbil, Sialk, Shahr-i Sokhta, and Ecbatana. Chogha Zanbil, ancient Elamite in Khuzestan is UNESCO world heritage preserved Architecture and the largest of all Ziggurats of Mesopotamia & Iran plateau. 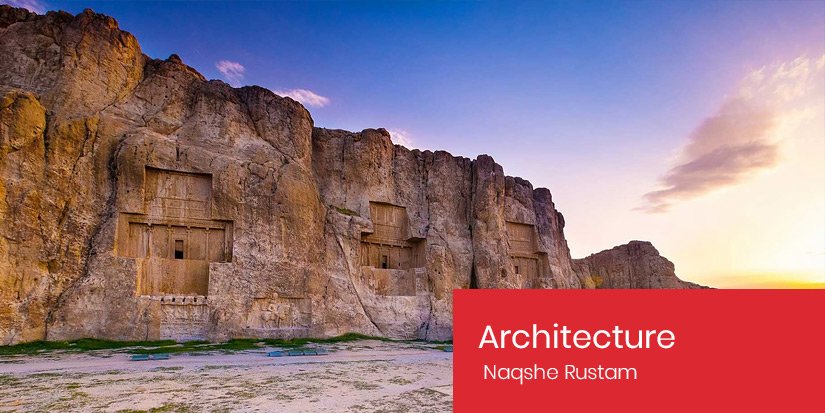 A unique style emerged in the Achaemenid era. The architecture in Achaemenid period between 550 BC and 330 BC was influenced by the Greeks, the Egyptians, and those from other provinces of the Persian Empire.

During Achaemenid ruling of Persian Empire, the kings wanted to show authority through architectural works and monuments.

This form of architecture which is called Achaemenid architecture was flourished at the time of Cyrus the Great. At this time massive complexes were built as well as palaces with columned audience halls, porticoes, square towers and high terraces.

The great audience hall of the Persian kings Darius and Xerxes presents a perfect visual overview of the Persian architecture in Achaemenid Empire. Persepolitan columns became popular with high bases and bell shapes at this time. Double staircases also were used to enter Xerxes I’s audience hall, and enameled brick was used.

The magnificent palace complex at Persepolis was founded by Darius the Great around 518 B.C Archeological remains show evidence of Persepolis dating to 515 BC, with part of the site being cut out of the surrounding mountains.

The remaining colossal buildings and relief sculptures are an incredible testament to ancient Iranian architecture.

Persepolis remained an important site until it was destroyed by Alexander in 330 B.C.E.

Naqshe Rustam is one of the most spectacular and eye catching ancient sites that was built during Achaemenid Empire. It is located about 6 kilometers north of Persepolis in Fars province of Iran.

Naqshe Rustam is the house of amazing rock tombs that were cut into the cliff. These rock tombs actually belong to four Achaemenian kings. The tombs are hewn into the rock at an impressive height from the base of the hills, and bear the resemblance of crosses. The tomb of Darius I is the only one that has been identified with certainty and the other 3 tombs are believed to belong to Xerxes I, Artaxerxes I and Darius II.

The Tomb of Cyrus the Great

Tomb of Cyrus the Great

The Tomb (or Mausoleum) of Cyrus the Great is located in the archaeological site of Pasargadae. The monument is about eleven meters high and the lower part, the platform, is about five meters high.

The Tomb of Cyrus the Great has no inscriptions on it, and its only decoration is a single carved rosette situated at the top of the gable on the entrance façade.

The Apadana palace is a large ceremonial building, in which king Darius I the Great received the tributes from all the subjects in the Achaemenid Empire, and gave presents in return. Apadana is the Persian term equivalent to the Greek hypostyle.

The hall had a veranda-shaped structure and was opened to the outside world at three of its sides. This distinguished the Apadana from the rest of the palace buildings in Persepolis.

Takhte-JamshidAfter Alexander conquest of Persian Empire and then his death in 323 BC, Persian architecture went through many changes. Stone buildings, brick with sculpted heads, and Hellenistic motifs were some of them.

As the result rubble and brick were used to rebuild the Parthian by the Sassanids who came into rule in AD226.

The Palace of Ardeshir

The Palace of Ardeshir

The Palace of Ardeshir’e Babakan, also known as the Atash Kadeh (Fire Temple), was built in 224 AD by Ardashir I the Sassanid king.  The structure is 104 meter by 55 meter. The balcony is 18 meter high, although it has partially collapsed.

The walls were decorated with stucco, which were inspired by the architecture of Persepolis. This palace is representative of the architecture change in Persia from Parthian to Sasanian period with emphasis gradually shifting to ashlar masonry, and large arch and bulbous domes.

Unlike most Roman domes of this age, the domes at the Firuzabad palace were not made of concrete but of brick. From the point of view of the history of architecture, they are more advanced than, for example, the Pantheon in Rome.

The earliest notable Persian monument in Iran after Arab invasion is the mausoleum of Ismail the Samanid at Bukhara which is a solid, square building in cut-brick style, covered by a dome.

A significant innovation by the Persians is the raising of a dome over a square hall by means of squinches. Also influential was their use of cut-stucco decoration, various intricate motifs, and ever-apparent symmetry.

Placed on UNESCO World Heritage list, Jameh Mosque is of deep architectural importance as it shows off designs employed for more than one millennium, starting in about 840 CE.

The origins of this mosque lie in the 8th century, but it burnt down and was rebuilt again in the 11th century during the Seljuk dynasty and went through reconstruction and renovations many times.

The mosque’s core structure dates primarily from the 11th century when the Seljuk Turks established Isfahan as their capital. In the center of the main courtyard, which is surrounded by four contrasting iwans, is an ablutions fountain. Linking the four iwans at the center is a large courtyard open to the air.

Jameh Mosque of Isfahanis one of the early Islamic buildings constructed upon the four-courtyard layout that originally practiced in making palaces during the Sassanid-era Iran (224 CE to 651).

Gonbad-e Qabus tower was built in 1006 AD which is an all-brick structure located at the center of the city Gonbad-e Qabus in Iran. Its intricate geometric forms constitute a tapering cylinder with unglazed fired bricks and a diameter of about 16 meter that is topped by a conical brick dome.

The Tower was built on such a scientific and architectural design that at the front of the Tower, at an external circle, one can hear one’s echo. The tower is the only remaining evidence of Jorjan, a former center of art and science that was destroyed during the Mongols’ invasion in the 14th and 15th centuries.

The Mongol invasions started in the 13th century, and many of the towns and art in Persia were lost as a result. 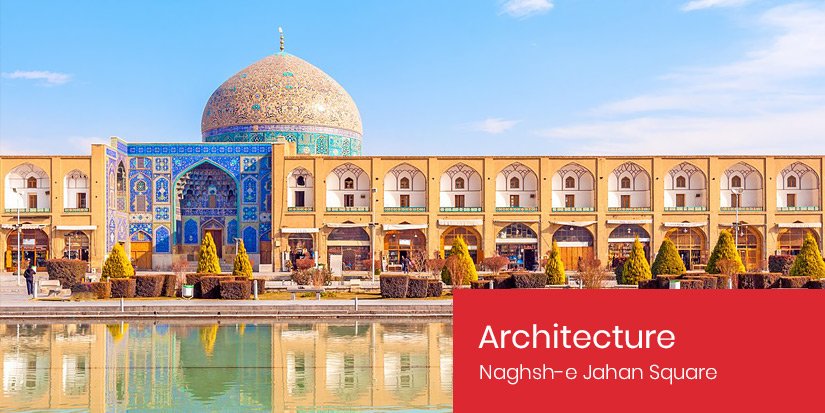 The Safavid Dynasty first came to power in 1449 and lasted until 1722.  The dynasty had a major impact and influence on culture, art and architecture.

A new age in Persian architecture began with the rise of the Safavid dynasty.

Ali Qapu, the six-store palace once served as a monumental gateway to the royal palaces. It also functioned as a reception pavilion for foreign dignitaries and embassies to the royal court.

Ali Qapu palace was built between 1611 and 1629 as a part of Naqsh-e Jahan Square complex by the decision of Shah Abbas and under the guidance of architect Shaykh Bahai.

The terrace affords a wonderful perspective over the square and one of the best views of the Masjed-e Shah and the mountains beyond.

The columns, like those of Chehel Sotoun, were originally encased in mirrored glass to give the impression of a roof floating in the air, and like them are cut from single Plane tree.

Chehel Sotoun is a pavilion located in the middle of a park and at end of a long pool. It was built by Shah Abbas II a Safavid King.

The name Chehel Sotoun (Forty Columns) was chosen because after reflection in the pool, the twenty columns supporting the entrance pavilion appeared to be forty.

Sheikh Lotfollah Mosque is one of the masterpieces of Persian architecture that was built by the prominent architect Sheikh Bahai in the early 17th century.

Sheikh Lotfollah Mosque is situated on the eastern side of this square and the northern side opens into the Isfahan Grand Bazaar.

One of the unique features of the mosque’s dome is the peacock-like shape at the center of its interior side.

There is a hole in the ceiling that the sun rays pass through it. At certain times of the day, if someone stands at the entrance of the hall, the sun rays seem as the tail of the peacock.

During the 17th century after it was built, the mosque was not open to the public, and served only as a private sanctuary. Today, it is open to everyone and was declared a UNESCO World Heritage Site.

The Naghsh-e Jahan Square is a public urban square in the center of Isfahan and is one of the largest city squares in the world and an outstanding example of Persian architecture.

This 160 meters wide and 560 meters long square is encircled by buildings from the Safavid era:

Naghsh-e Jahan in Farsi means “The image of the world”.

The square is surrounded by structures of different purpose and architecture, and together with the main bazaar of Isfahan they comprise the huge complex.

Naghsh-e Jahan Square is one of UNESCO World Heritage Sites!

The square has changed little since it was built, and at each end the goal posts used in regular polo games 400 years ago are still in place. 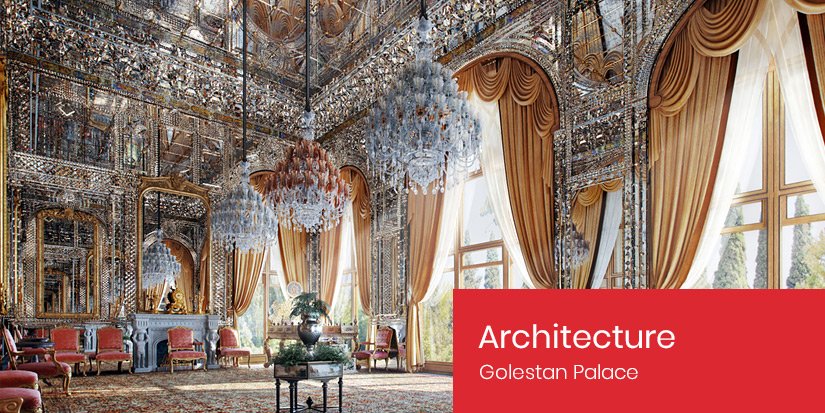 Under the Qajar dynasty a distinctive, theatrical style was developed in Persian architecture.

Golestan Palace is the former royal Qajar dynasty complex and one of the oldest groups of buildings in Tehran.

The site comprises 8 palace complexes around a garden.

The complex exemplifies architectural and artistic achievements of the Qajar era including the introduction of European motifs and styles into Persian arts. The construction and development of the Golestan Palace complex dates back five centuries, in correlation with the growth and expansion of Tehran as Iran’s capital.

The building complex has been built and modified during four different dynasties: Safavid, Zand, Qajar and Pahlavi.

The palace was originally built in the time of Shah Abbas of the Safavid dynasty but rebuilt in 1865 by architect Haji Ab ol Hasan Mimar Navai on the orders of Naser Al-din Shah and most of the buildings we see today date from that period.

Golestan Palace was registered on the UNESCO world heritage list in 2013!

There are many more examples of Persian architecture that few of them are mentioned below:

Nasir Al-Mulk Mosque which was built in the 19th century during the Qajar rule. It is also known as the Pink Mosque, and it is recognizable by its colorful glass. The light passing through the windows colors beautifully on the reflective ground tiles.

Eram Garden (Bagh-e Eram), located along the northern shore of the Khoshk River in Shiraz, is one of the most famous and beautiful Persian gardens in all of Iran.

Eram garden was registered as a UNESCO World Heritage Site in 2011 – the symbol of Persian gardens!