Renaming-Persia
The name Persia is actually a Latin derivation used mainly by Westerners to describe the region roughly equivalent to that of present day Iran. During the reign of the Sassanids it became Eran – meaning “land of the Aryans“. In…
0 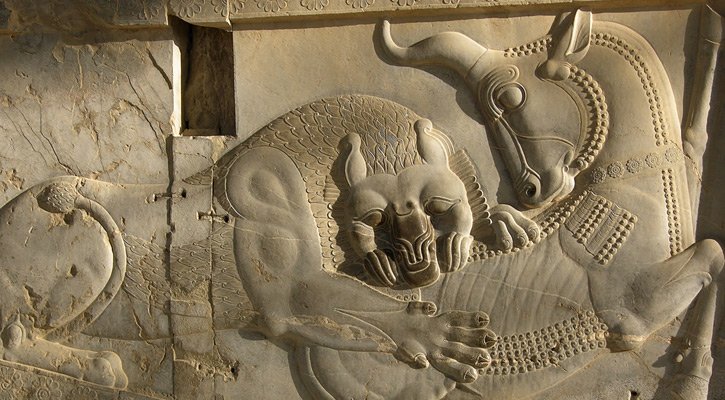 The name Persia is actually a Latin derivation used mainly by Westerners to describe the region roughly equivalent to that of present day Iran. During the reign of the Sassanids it became Eran – meaning “land of the Aryans“.

In 1935 (Reza Shah Pahlavi) asked foreign delegates to use the term “Iran” instead of “Persia“.

Even today, in an effort to separate themselves those opposed to the current government in Iran continue to refer to themselves as Persians.

The name Persia is actually a Latin derivation used mainly by Westerners to describe the region roughly equivalent to that of present day Iran.

The name ‘Persia’ comes from ‘Pers’ which is the European version of ‘Pars’.

The term Persian is an exonym and Iranians never historically referred to Iran by that exonym. In Latin, the name for the whole empire was Persia, while the Iranians knew it as Iran or Iranshahr.

For thousands of years, Iran was known as Persia. The Persian Empire refers to the series of imperial dynasties that existed from the 6th century BC to the 20th century AD which was started with the Achaemenid Empire formed by Cyrus the Great was followed by Sassanids.

In truth during the rise and fall of the Persian Empire the land was known to its people as “Aryanam“, which is equated to the current “Iran” in the proto – Iranian language.

The first use of the modern derivative of the words such as Aryana, Eran or Airan, is seen in the rock inscriptions of the Persian Sassanian kings that ruled from 226 to 651 ACE. The inscription can still be found at Naqsh-e-Rustam.

Also in the inscriptions, King Ardeshir I, who ruled from 226 to 241 ACE, is referred to as king of kings of Eran. During the reign of the Sassanids it became Eran – meaning “land of the Aryans”.

Persian kings like Darius the Great and Xerxes are described as ‘Aryans of Aryan stock.’ This most likely refers to the original Aryans coming from Central Asia.

In the scripture below, Darius I (Darius the Great), the Achaemenian king, in the 5th century BCE, declares himself a Persian and form the Aryan race.

I am Darius, the great king, the king of kings The king of many countries and many people The king of this expansive land,The son of Wishtaspa of Achaemenid,Persian, the son of a Persian,’Aryan’, from the Aryan race

– From the Darius the Great’s Inscription in Naqshe-e-Rostam

Parsis or Parsi and the Background

Zoroastrianism was the state religion of three Persian dynasties, until the Muslim conquest of Persia in the seventh century A.D.

The Parsis, whose name means “Persians”, are descended from Persian Zoroastrians who immigrated to India to avoid religious persecution by Muslims.

(Who) are Aryans and (where) did they come from?

Aryan by definition meant anyone speaking any of the Indo-European languages, including that of the Iranians.

These people migrated to northern India sometime around 1,500 BC. Previous inhabitants of the Indian subcontinent called these newcomers Arya.

The English ‘Aryan’ comes from this Sanskrit word.

The original meaning of the term is unknown and different meanings have been proposed, the most common one being nobleman.

Unfortunately, with the rise of Hitler in the 1930’s, “Aryan” came to be associated with the Nazi definition: being of Non-Jewish Caucasian descent, especially the blue eyed, blond haired Nordic races that Hitler himself favored and hoped to make a master race.

In Europe the notion of white racial superiority emerged in the 1850s largely by the Comte de Gobineau and later by his disciple Houston Stewart Chamberlain.

They first used the term “Aryan” to mean the “white race.” They considered the white race to be superior to “Semites,” “yellows,” and “blacks.”

People who believed in Aryanism ideology regarded the Nordic and Germanic peoples as the purest members of the “race.”

Later Adolf Hitler claimed that Aryans were “master race” and were supposed to be Nordic in appearance and directly ancestral to the Germans. Hitler argued that the German which he wrongly described them as the Aryan race; was superior to all others.

The association with racism and race crimes and Nazism has given the word a powerful new negative sense.

Today, the word ‘Aryan’ is loaded with all sorts of negative connotation, largely due to Nazi ideology; Aryans have become associated with racial hierarchies that consider white, blonde, blue-eyed peoples superior. However, it is not factual.

The West, influenced as it was by Greek and Latin literature, continued to call Eran ‘Persia‘, presumably out of habit or because the rulers of Iran were Persians. In fact, in 1935, Dr Hjalmar Schacht, the Nazi Economics minister noted the Aryan origin of the Persians and encouraged the Persian Reza Shah Pahlavi to ask foreign delegates to use the term Iran, “land of Aryans” instead of Persia.

As the New York Times explained at the time:

“At the suggestion of the Persian Legation in Berlin, the Tehran government, on the Persian New Year, March 21, 1935, substituted Iran for Persia as the official name of the country.”

Defenders of the name change, point to its use by the Greek historians citing that “Aryan” means “noble”.

Many also felt that calling something or someone Persian was dated and somewhat restrictive. Modern Iran is comprised of a large number of different ethnic and tribal groups.

People who identify as Persian account for the majority, but there are also large numbers of Azeri, Gilaki and Kurdish people, too. There was a need to unify the people of this land under one nation, Iran, thus encompassing the other ethnicities, such as the Kurds or Turks, residing in former Persia.

In its decision it was influenced by the Nazi revival of interest in the various Aryan races, cradled in ancient Persia. As the Ministry of Foreign Affairs set forth in its memorandum on the subject, ‘Perse,’ the French designation of Persia, connoted the weakness and tottering independence of the country in the nineteenth century, when it was the chessboard of European imperialistic rivalry.

‘Iran,’ by contrast, conjured up memories of the vigor and splendor of its historic past.”

This change however, evoked much opposition and confusion as Persians felt that the term damaged their cultural heritage and aligned them with pro-Nazi sentiment.

Additionally, all too often Iran was confused with their neighboring Arab state of Iraq, so much that during World War II, Winston Churchill called to enforce continuation of the term of Persia when dealing with political documentation. But in fact the name of the country within Persia the name has pretty much always been a variant of Iran.

Even today, in an effort to separate themselves from government; those opposed to the current government in Iran continue to refer to themselves as Persian.

The terms Iranian and Persian are often used interchangeably to describe people from Iran.

Some people draw a distinction in that Persian relates to a particular ethnicity, and being Iranian is a claim to a certain nationality.

When did “Persia” become Iran?

In 1959, the work of Professor Ehsan Yarshater, editor of Encyclopedia Iranica, propagated a move to use Persia and Iran interchangeably which was approved by Mohammad Reza Shah.