Persian Women
Royal women owned land and estates in Persia as well as outside the Persian heartland such as Babylonia, Syria, Egypt, and Media.
0 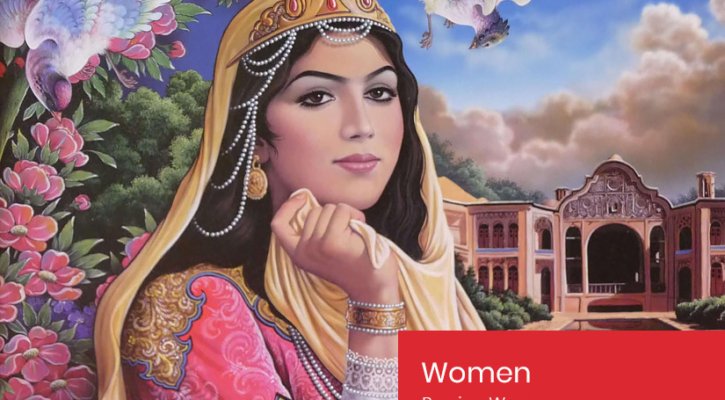 “Persian Women” & Their Glorious Past

Many ancient Persian cities and states were ruled by women and had their army totally under control of female commanders.

Women in Persia were very honored and revered; they often had important positions in the Courthouse, Ministries, Military, State and Treasury Department, and other official administrations. Women were treated like Goddesses esteemed as mothers of creation before the barbaric invasion upon Persia.

Recent works on the role of women in ancient Persia show great participation by women in all facets of life, indicating not only their autonomy and independence, but the existence of an equal social system which accepted the authority and independence of women.

Not all women enjoyed the same status or power in Ancient Persia. Royal women certainly enjoyed more influence than non-royal women. In art, we can see royal women depicted almost identically to men with similar clothes, hairstyles and poses, so we can conclude that they enjoyed many of the same rights and privileges as men.

The Persepolis tablets reveal three different terms of reference for women, Mutu, Irti and Duksis. The first one is always applied to ordinary women while the other two were used for royal women.

In one document Artazostre, a daughter of King Darius is referred to as Mardunuya Iriti Sunki Parki meaning “the wife of Mardonius, daughter of the king”.

Such use of terminology shows the significance of the women’s marital status and her relationship to the king.

Although noble Persian women had to act within a defined framework set by the king, they also enjoyed economic independence and had control over their wealth. One of the most interesting finds was the discovery of a large number of seals in the graves of women. Seals in antiquity were often symbols of power and authority.

The fortification tablets at the Ruins of Persepolis also reveals that men and women were represented in identical professions and that they received equal payments as skilled laborers and that gender was not a criterion at all (unlike our modern world).

One of the reasons that Ancient Persians held women in high regard might have been their religion. Zoroastrianism was the dominant religion, and its ideology that stressed men and women were equals. Naturally, this would shape the worldview of Ancient Persians, and we can say that overall women were seen as important figures in society. New mothers and pregnant women even received wages far above those of their male co-workers as gratitude.

There is much evidence that the principles of Zoroastrianism lay the core foundation to the first Declaration of Human Rights in the Persian Empire set by Cyrus the Great since the rulers of Persia were Zoroastrians and relatively liberal and progressive.

Mandana was a Median princess and mother of Cyrus the Great, (ruler of Persia’s Achaemenid Dynasty and the writer of the first declaration of human rights in the globe, named: Cyrus Cylinder).

Amitis Shahbanu was a Median princess, who became the wife of Cyrus the Great.

Pantea Arteshbod (Commander of the Persian “Immortal” Army), was one of the all-time greatest Persian commanders during the reign of Cyrus the Great. Commander Pantea truly was an important and sensitive military commander whose presence on the ancient battlefield made a difference to the outcome of the battle and played a part in building up the tapestry of ancient military Achievement. The name “Pantea” means: “Strong and immortal.” in Persian and “all the gods” or “all the flowers” in Greek.

Cassandane Shahbanu was an Achaemenid Persian noblewoman, she became the wife of Cyrus the Great several years after his first beloved wife Queen Amitis passed away.

Mahruyeh Shahbanu was the Queen of the Persian Achaemenid Empire. The name “Mahruyeh” means: “Pretty face.”

Lieutenant Artunis was the Commander of the Achaemenid Persian Army. She was a mighty brave woman.The name “Artunis” means: “True and faithful.”

Atusa Shahbanu was the Queen of the Persian Achaemenid Empire, wife of King Darius the Great. She was very wealthy with her own administration and massive personal army. The name “Atusa” means: “Beautiful body.” (Alternative spellings are: Atoosa, Atousa, or Atossa.)

Phaidyme Shahbanu was an Achaemenid Queen, one of the seven conspirators who helped Darius the Great to assume the throne. The name “Phaidyme” is a Hellenized form of an unidentified Old Persian name.

Irdabama was a highly Successful Historical Business Woman. She was a major formidable landowner and controlled a huge workforce. She proved that possession of enormous property, wealth and good social standing was not limited to Royal women and that everything was possible with hard work and determination. Irdabama was just one of the many successful and powerful business women in the ancient Persian World. The name “Irdabama” is a Hellenized form of an unidentified Old Persian name.

Amestris Shahbanu was the beautiful daughter of Otanes. She was also an Achaemenid military Commander and her mother was a Arteshbod General of the Imperial Army. She had the reputation to be more bloodthirsty than any Persian king had ever been against those who broke the law in order to set a precedent for the importance of the rule of law in the empire. The name “Amestris” means: “Friend, companion.” (Comes from Old Persian “Amastri” with the meaning “Strong woman”)

Grand Admiral Artemisia became the ruler of Halicarnassius (A Greek City-State and a colony of Persian Empire). She ruled under the overlordship of the Persian Emperor Xerxes I (Kheshayar Shah). The name “Artemisia” means: “The great speaker of truth.”

Esther (born “Hadassah”) was the wife of King Xerxes the Great. The name “Esther” comes from the Persian word: “star”.

Pari Satis (Parysatis) was the half-sister of Xerxes II. She was also a General (Arteshbod) and took full command of the Imperial Army when her husband died in battle. The name “Pari” means: “Angel-like.”

Sissy Cambis was the Empress of Persia and the Mother of Darius the Third, she was a remarkable Achaemenid woman who fought, resisted and did not surrender to Alexander the Macedonian Tyrant. The name “Sissy” means: “Fortunate.”

Youtab Aryobarzan was the Commander of Achaemenid Army, sister of the legendary Persian Hero, General Aryobarzan, she stood side by side to her brother and fought the Greeks and Macedonians to death during the invasion of Alexander. The name “Youtab” means: “Unique.”

Princess Roxana was daughter of King Darius III, Shahanshah of The Persian Empire! The name “Roxana” means: “The dawn and luminous beauty.” (in both Persian and Bactrian).

Sura was one of the Greatest Heroines of Persian History, A strategical and Military Genius during the Parthian dynasty. Sura had the rank of: Ashkanid’s General, Sepahbod (Lieutenant General). The name “Sura” means: “Flower face.”

Azadokht Shahbanu was the Queen of the Persian Sassanid Empire. Azadokht was not a military woman but she was very skilled with her sword. The name “Azadokht” means: “Free girl.”

Princess Aspas was a Commander of the Persian Sassanid police force and a daughter of Emperor Ardeshir the Second. The name “Aspas” means: “Guard of strength.”

Princess Parin was a Persian Sassanid politician, daughter of Qobad, Counselor of the Persian Courthouse, extremely intelligent and confident female politician. The name “Parin” means: “Same as an angel.”

Zand Shahbanu was the Queen of Persia and the mighty Wife of King Khosrow Anushirvan: ruled 531–579 C.E. (The most illustrious of the Sassanid Rulers) and the niece of General Bahram Chubin). The name “Zand” means: “Precious.”

Shirin Shahbanu was the Queen of the Persian Sassanid Empire and the wife of King Khosrow Parviz 590-628 C.E. The name “Shirin” means: “Sense of sweetness.”

Empress Purandokht was the twenty-sixth Sassanid monarch of Persia, reigning from 629 to 631. The name “Puran-dokht” means: “Beautiful-girl.”

Empress Azarmidokht was the daughter of King Khosrow Parviz. She was the twenty-seventh Sassanid Monarch of Persia and she ruled the empire after her sister Purandokht during the Sassanid Dynasty era. The name “Azarmidokht” means: “Youthful girl.”

Banu was the Wife of Babak Khoramdin (Persian Legendary Freedom Fighter). She fought side by side to her husband Babak. Banu and Babak Khoramdin are considered as one of the most heroic freedom fighters of Persia who initiated the Khoramdinan movement. They lived and they died as Proud Persians until the last drop of blood was shed. The name “Banu” means: “Lady.” (Alternative spellings: “Bānu Xorramdin”)

Turandokht was the beautiful Princess of Persia during the Sassanid dynasty era. In The Book of One Thousand and One Nights (Hezar o-yek shab), she became an icon of nobility and stature. The name “Turandokht” means: “Turanian girl.” (Turan’s Daughter) with “dokht” being a contraction for “Dokhtar” in Persian (meaning “Daughter”)

Apranik was a Persian Sassanid High Ranking Commander of Army and fought gracefully, as a resistance commander. Apranik was a tireless inspiration for her troops in defense of their nation against outside aggressors. The name “Apranik” means: “Daughter of elder.”

Negan was a freedom Fighter Leader, A Guerrilla Commander during Sassanid dynasty era and after the Arabo-Occupation, one of the major resistance fighters of Persia against the Arab Invasion. Negan was not a military woman, nor a woman of nobility, yet she had a heart full of love for Persia. Her heart was pounding for the Mother Land. The name “Negan” means: “Good destiny.”

Azad Deylami was a Guerrilla Commander and a partisan leader from Caspian Sea shores in north of Iran who fought bravely for many years with her band of freedom fighters against the Arab Oppressors, during the Occupation era.The name “Azad” means: “Free.”

Chista was a daughter of Asho Zarathushtra, who was a significant figure in the Zoroastrianism religion, once the dominant religion of the ancient Persian Empire. The name Chista means intelligent and she was a major figure in the religious teachings of the ancient world.

Throughout the history of Iran, women have been a vital force and have always taken a fundamental and representative role in the development of Iran. Not only are Iranian women in the spotlight for their fighting spirit but also their natural, physical attributes. Their rich endowment and low toned voice are some of the features that make them appealing.

There are many Iranian women who have had a great influence on not just their fellow Iranians but women all around the world in modern era.

Anousheh Ansari is an Iranian engineer and co-founder and chairwoman of Prodea Systems. Anousheh Ansari is considered the first female private space explorer and first space ambassador, earning a place in history as the fourth private explorer to visit space and the first astronaut from Iran. She immigrated to the United States as a teenager and made her way to the top universities, helping to found a number of successful IT companies before setting her sights on the stars.

Maryam Mirzakhani was an Iranian mathematician working in the United States. Since 2008, she has served as a professor of mathematics at Stanford University. In 2014, Mirzakhani became both the first woman and the first Iranian honored with the Fields Medal, the most prestigious award in mathematics. The award committee cited her work in understanding the symmetry of curved surfaces. Her research topics include Teichmüller theory, hyperbolic geometry, ergodic theory, and symplectic geometry.