Persian Tarof
Taarof or Ta’arof is an Old Persian tradition and the Iranian art of etiquette. It is about raising others and "self-lowering" yourself which is the sign of respect.
0 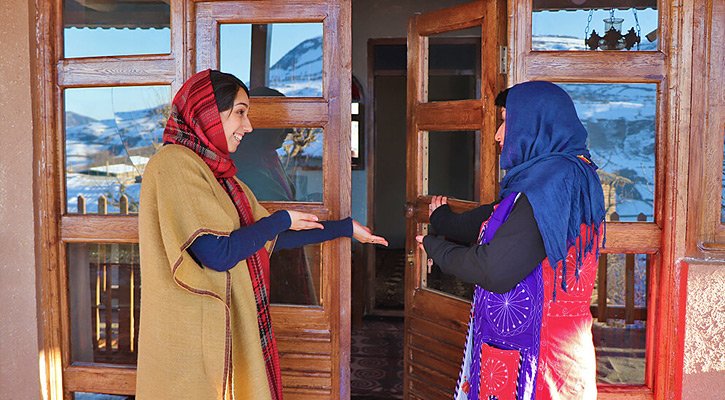 What is a “Tarof”? – The Persian Art of Etiquette

(Taarof or Ta’arof): is an Old Persian tradition and the Iranian art of etiquette. It is about raising others and “self-lowering” yourself which is the sign of respect. Iranian hospitality is more than just being polite.

Iranians are known for being one the most hospitable people in the world.

If anyone wants to understand a country and its people, they should start by knowing and understanding of their culture and customs. Iranians are known for being one the most hospitable people in the world. 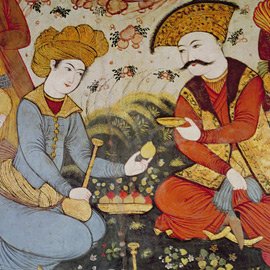 From the very young age, Iranian kids are taught to share their toys with friends and save their candies or sweets for them because guests were important people. It comes from the Persian tradition of treating putting your guests and their need first and the insatiable desire to be the best hosts.

Taarof or Ta’arof is an Old Persian tradition and the Iranian art of etiquette.

It is about raising others and “self-lowering” yourself which is the sign of respect.

William O. Beeman, the linguistic anthropologist at the University of Minnesota says the idea of “Taarof” is to abase oneself while exalting the other person. He explains taarof as “fighting for the lower hand,” but in an exquisitely elegant way, making it possible, in a hierarchical society like Iran’s, “for people to paradoxically deal with each other as equals.”

You should grow up in Persian culture to fully understand Taarof.

Explaining the concept of Taarof is a bit complicated especially to the people that never experienced that. So I start by giving an example:

A simple example of taarof is when two friends or colleagues want to enter or leave the room. Usually anywhere in the world in this situation one of them says “after you” and then they enter the room. But that’s not the case in Iran.

They keep “Taarofing” and complimenting each other till finally one of them gives up and enter first and even then he would say “Sorry”! The person who forces the other to go through the door first is being graceful and has shown deference to the other person.

Never sit with your back to someone (Here comes another Tarof!)

Sitting with your back to someone is considered extremely rude in Persian culture. But in some occasions you have to that’s when Taarof comes handy. Imagine you’re sitting on the front seat of a car, you should immediately apologize and say “Bebakhshid Poshtam be shomast” literally meaning “sorry my back is to you”.

The Tarof continues as the person behind you says “Gol posht o rou nadare” which means “a flower has no front or back”. So the person behind you is calling you a flower, at this point either you say thank you or further compliment the one in the back seat by saying “Poshte gol baghe gole” meaning “behind the flower is the garden of flower”. You’re basically saying “he is a garden”!

So at the end no one is offended.

Even some creative truck drivers in Iran have used the term “sorry my back is to you”, on the back of their car so when you are in traffic and their car is in front of you, you’d see the phrase. 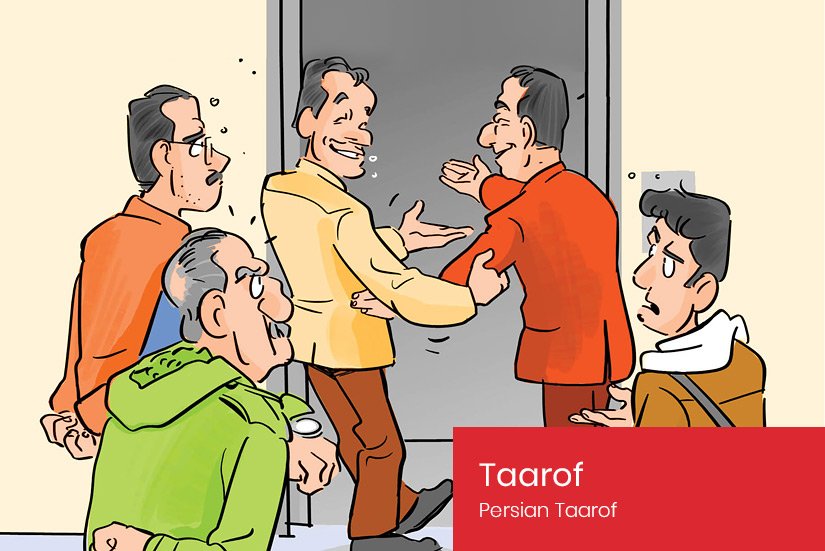 Tarof – At the Parties

If you’re invited to an Iranian household for the first time, bring flower or a box of chocolate. When the host says thank you and “chera zahmat keshidid?” meaning something like “why did you do it?” you say “ghabele shoma ro nadare” meaning “It’s not worthy of you”. You should check to see if the host is wearing shoes. If not, remove yours at the door.

In an Iranian house usually you’re supposed to take off your shoes before entering the house. It would be considered rude to walk on the precious Persian carpet with your shoes on. It’s also very polite to greet the elders first. Shaking hands with the children and praising their politeness is also appreciated.

At the party if you are offered something like beverages or food, you are supposed to refuse at first so you won’t come out as greedy or impolite. The host then would insist and offer again and finally you would accept it. . Even if you want another piece of cake or anything you must refuse the offer the first time. The host in return keeps reinstating the offer and finally brings the food you refused.

When you’re leaving the party, you should tell the host “bebakhshid zahmat dadam” which means “sorry for causing you trouble” even though you were invited to the party. Any other scenario would be considered rude. Then the host would literally beg you stay for the night or a bit more even if it is 2 in the morning or he or she is exhausted which you’re supposed to politely decline.

Tarof – Paying for the restaurant bill

If you see two Iranian arguing in a restaurant, don’t panic; they’re probably fighting over who is going to pay the bill. Everyone will try to pay the bill even by snatching credit card out of your hand. But don’t worry if you don’t get to pay this time, things will even out as you treat someone to their meal the following occasion and vice versa.

If you praise anything in an Iranian house hold, they would offer it to you even if it’s very valuable. If you compliment Iranians for their look, they won’t answer by simply saying thank you. They say “cheshmatoon ghashang mibine” which literally means “Your eyes see it beautifully”.

Tarof – In a Cab/Taxi

It is common for Persian taxi drivers to tell you “ghabel nadare” at the end of the ride when you’re trying to pay the fare. Out of respect they refuse at first but eventually take the money. There is an unwritten rule of two or three rounds of offering and refusing in taarof. Also Iranian taxi drivers usually start a chat with their passengers about social or political issues and you’d be surprised how informed they are.

Tarof – In the shop

Taarof is also a big part of the buying and selling in Persian culture. When you ask an Iranian shop keeper the price of the item you’re going to buy, the seller first refuses and says “ghabel shoma ro nadare” then you say “khahesh mikonam” meaning “please, I insist” then the shop keeper says “mehman e man bashid” meaning “be my guest” and finally tells you the price.

Some useful Persian Taarof phrases and their meaning: