Persian Party
Party is a social gathering of people for the purposes of entertainment or a special occasion. Mehnooni is the Persian word for Party. Iranians always want to have fun.
0 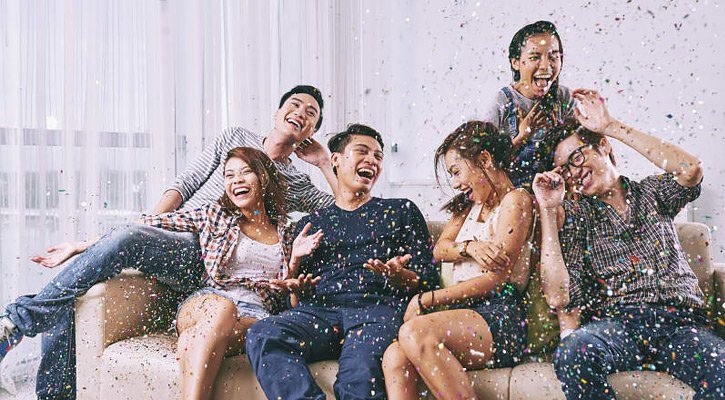 “Persian Parties” & (Why) You Should Attend One

Party is a social gathering of people for the purposes of entertainment or a special occasion. Mehnooni is the Persian word for Party. Iranians always want to have fun.

As any other Persian gathering, Taarof and food are both important parts of a Persian Mehmooni or party.

Party is a social gathering of people for the purposes of entertainment or a special occasion. 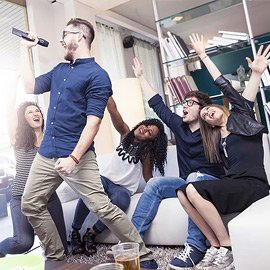 Mehnooni is the Persian word for Party. Iranians always want to have fun. They look for any excuse to get together, eat delicious Persian meals and snacks, socialize and build personal relationships with one another, tell stories and jokes, dance and basically enjoy themselves. Mehmooni is their chance. And as any other Persian gathering, Taarof and food are both important parts of a Persian Mehmooni or party.

Also in Persian parties the Persian tea in constantly served. Backgammon and chess are also played in Persian Parties.

The first 13 days after the Persian New Year (Norooz) you’re supposed to visit all of your relatives and if have a big family, you are going to attend many Norooz parties. In Norooz parties different fruits, snacks and nuts are served. In every Norooz party Ajil should be served which consists of pistachios, roasted chick peas, almond, hazelnuts, and raisins.

It is also a custom for the host to give bank notes to guests during Norooz parties. However, any gift can be given to one another, gifts such as calendars, books and more. These gifts are called Eydi and usually are given by adults to the kids or other younger members of the family.

The Jahaz Baroon is also traditionally known as “Tabagh Baroon“. This party takes place a few days before the wedding. In Iran bride’s parents are supposed to provide the important items for the couple’s life. The items are furniture, refrigerator, oven and other necessary items which are called “Jahizieh“. The bride’s family set the couple’s house with these items. In Jahaz Baroon party, the bride presents her jahizieh and the bride and groom’s relatives come to the couple’s house to see the jahizieh, eat snacks and drink tea.

Pa Takhti is a Persian party which is held the day after the wedding night. On this day the bride wears make up and dresses up. The Pa Takhti is usually held in groom’s family house and in some cases in the couple’s house.

It is similar to American Bridal shower.

Pa Takhti is informal party in which only female relatives and friends are invited. The guests bring the bride and groom their wedding present. Fruit, sweets and drinks are served and then each gift is opened. Pa Takhti is spent by dancing, singing and socializing with new family members. 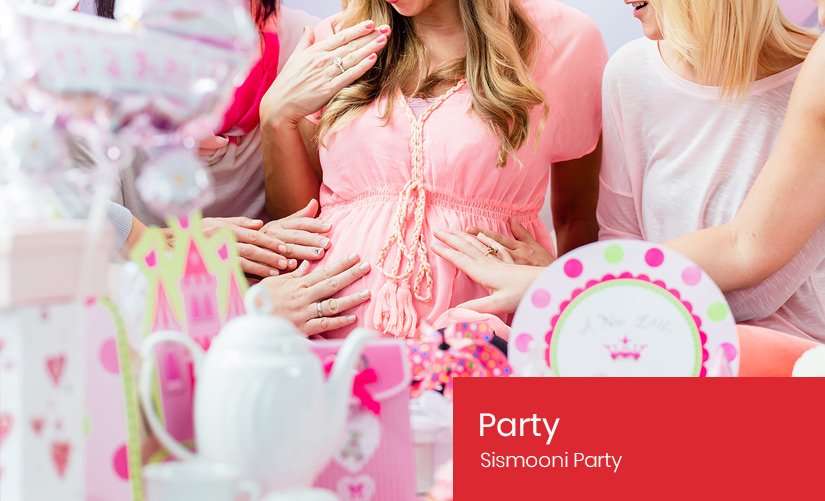 Sismooni is a Persian party held about one month before the child’s birth. It is similar to baby shower party. In sismooni party only female relatives and friends are invited. The guests would bring gifts for baby such baby clothes and toys. Also the family that is expecting baby is showing off what they bought for their kid. The bed, closet, clothes and toys and everything that were bought for the baby is called sismooni hence the name of the party. The mother of the mom to be is supposed to buy sismooni for the baby.

Cheshm roshani is the name the party that is held after the baby is born which thrown by the new parents. This is a Persian party for family and friends to see and hold the adorable new born baby and give him or her gifts. The cheshm Roshani gift is usually money or gold.  This party is similar to ‘welcome baby’ or ‘sip and see’ party.

Dandoon in Farsi means Tooth. Dandooni is a Persian party which is thrown when the baby has his or her first teeth. Again family and friends are invited to the party and are supposed to bring small gifts. 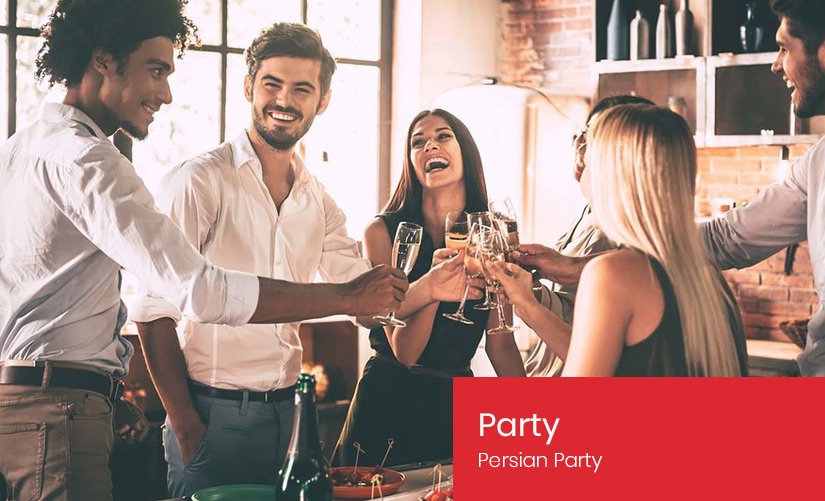 Manzel in Farsi means house and Mobarak means happy. It is the same a house warming party in which after the family moved to a new house, relatives and friends bring gifts for the hosts. This party is also a chance for the hosts to present their new house. The gifts are usually money, gift cards, dinner plates set and etc.

Iranians have two types of Ja Khali parties, one for the bride and the other one for boys that attend mandatory military service.

Ja Khali party is held one week after the wedding. It is a custom for the family of bride to go to her house and give her gifts as a way to say they miss her and as the phrase in Farsi literally means her place is empty.

In Iran boys who are over 18 years old are supposed to attend military service for about 24 months. The relatives visit the boy’s parents when he is in military and bring gifts. 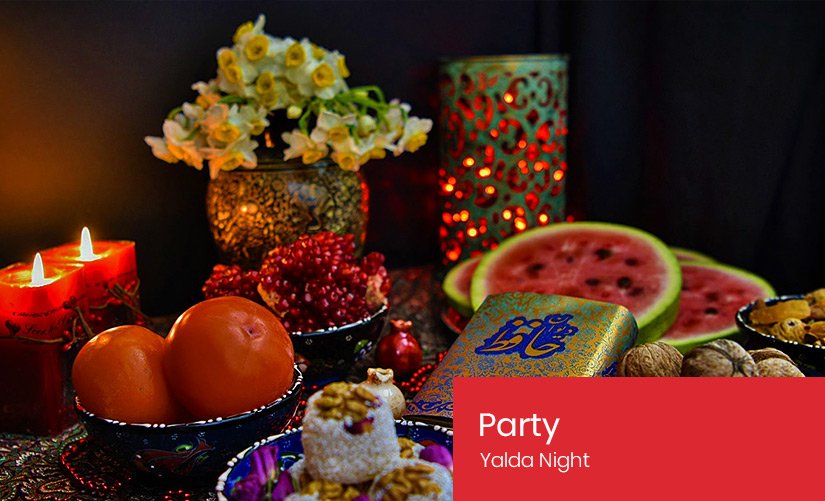 Iranians celebrate the longest night of the year known as Yalda or “Shabe Chelle” (Night of Forty).

Yalda (after Norooz) is one the most ancient Persian tradition and celebration.

Iranians celebrate Yalda by gathering with their family and friends and staying awake all night. Yalda’s origin like most of Persian traditions goes back to Zoroastrian era. Ancient Persians thought that evil forces were present on Yalda and that the next day the Lord of Wisdom, Ahura Mazda was present. It was considered the victory of light over darkness after longest night of the year. Yalda Night party is usually thrown by the oldest members of the family like grandparents.

On Yalda night, everyone gathers around “Korsi” and the oldest member of the family reads “Divan Hafez” (Hafez’ poems collection).

It’s a Persian tradition that each member of the family makes a wish and then opens Divan Hafez, and base on the poem they see they interpret if their wish will come true. Like any other Persian celebration, food plays an important role. The night is spent by eating dried fruits such as apricot and peach and different nuts like walnut, pistachio, hazelnut and almond; and fruits such as pomegranate, watermelon and Persimmons.

Like anywhere else in the world Iranians throw birthday parties for their family and friends. These parties can be mixed or only male or female which are either thrown in the house or a restaurant or café.

Walime is an Arabic word meaning to gather or assemble. When Iranians travel to Islamic holy cities such as Mecca and Mashhad and upon returning, they are supposed to throw a party which is called walime and invite family, friends and relatives.Walime is a dinner party at the end of which the guests give the host (Haji) gifts.