Persian Gulf
The Persian Gulf is one of the most critical bodies of water, is positioned in the heart of the Middle East. Located in southwestern Asia, it separates the Arabian Peninsula from Iran (formerly called Persia).
0 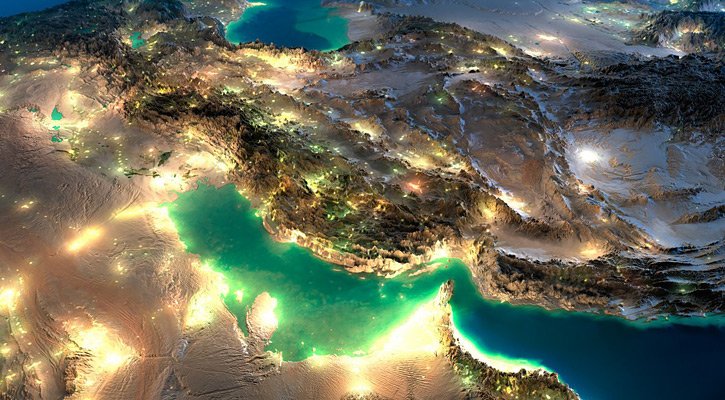 The Persian Gulf is (one of the most critical bodies of water), is positioned in the heart of the Middle East. Located in southwestern Asia, it separates the Arabian Peninsula from Iran (formerly called Persia).

It connects with the Gulf of Oman and the Arabian Sea through the Strait of Hormuz, which is 30 to 60 miles (48 to 96 kilometers) wide.

Persian Gulf Region is (the most important) single geographical zone in the world.

The Persian Gulf, one of the most critical bodies of water, is positioned in the heart of the Middle East. Located in southwestern Asia, it separates the Arabian Peninsula from Iran (formerly called Persia).

Persian Gulf is considered to be an extension of the Indian Ocean, and is a Mediterranean sea. It connects with the Gulf of Oman and the Arabian Sea through the Strait of Hormuz, which is 30 to 60 miles (48 to 96 kilometers) wide.

It is also a large fishing source and was once the chief center of the pearling industry.

Life in the Persian Gulf revolved around the natural pearl for centuries, according to archaeological evidence dating back to the Late Stone Age in 6000–5000 BC. The Epic of Gilgamesh, a poem from 700 BC Mesopotamia that is among the first recorded examples of literary fiction, describes how the hero dived to the depths with weights tied to his feet for the “flower of immortality”, a well-known early allusion to pearling. By 100 AD, Pliny the Younger had declared that pearls were the most prized goods in Roman society, with those from the Persian Gulf reigning as the most esteemed.

The Persian Gulf is a semi-closed basin which is world’s largest oil reserves and the largest commuter route for oil tankers.

Although oil was discovered in the Persian Gulf in 1908, it was not until the 1930s, when major finds were made, that keen international interest in the region revived.

When it comes to oil production, the Persian Gulf Region – Bahrain, Iran, Iraq, Kuwait, Oman, Qatar, Saudi Arabia, and United Arab Emirates (UAE) – is the most important single geographical zone in the world.

Nearly 50% of the world’s total oil reserves are estimated to be found in the Persian Gulf!

The Persian Gulf countries contain a significant percentage of the world’s oil reserves and production capacity.

The Persian Gulf has been the focus of the 1980-1988 Iran-Iraq War, in which each side attacked the other’s oil tankers.

In 1991, the Persian Gulf again was the background for what was called the “Persian Gulf War” or the “Gulf War” when Iraq invaded Kuwait; although despite the name this conflict was primarily over land. Before Iraq was expelled from Kuwait in February of 1991, Iraqi soldiers set fire to over 500 Kuwaiti oil wells and dumped millions of barrels of oil into the Persian Gulf, causing an environmental crisis and threatening desalination plants throughout the area.

The area again was the scene of warfare in 2003 when U.S. and British forces invaded Iraq. The Persian Gulf’s vast oil reserves make the area a continuing source of international tension.

The Size of Persian Gulf

Countries with a coastline on the Persian Gulf consist of:

Various small islands also lie within the Persian Gulf. (See Maps)
On almost all maps printed before 1960, and in most modern international treaties, documents and maps, this body of water is known as the “Persian Gulf”.

The ancient geographers Strabo and Ptolemy called this stretch of water the Persian Gulf – a name that has persisted into modern times.

In recent years; and since 1960’s certain groups have attempted to change the name and history of this ancient gulf.

Qeshm, also spelled Gheshm or Qishm is the largest island in the Persian Gulf, belonging to Iran.

Qeshm Island has a plethora of natural attractions, from pristine islands to forests, valleys to caves. This Island is 135 kilometer (83.9 mile) long and has 40 kilometer (25 mile) width. Fishing is a leading occupation practiced by the people of the Qeshm Island.

This Island with an area of 1,200 square kilometers (460 square miles), has an irregular outline and a generally rocky coast except for sandy bays and mud flats fringing the northwest. Irregular table-topped hills almost cover Qeshm; some of them are over 270 meters (900 feet) high and one even reaches 406 meters (1,331 feet). The island is a free-trade zone, and foreign tourists require no visa for up to 14 days.

In the Qeshm Island’s northwest lies the beautiful sinuous Chahkooh canyon. Chahkooh Canyon is the Great Canyon of the Middle-East. The surreal shapes of the colossal rocks of the canyon are the result of millennia of erosion by rain and wind. Chahkooh’s notoriety among the natives as the abode of the Devil’s spawn has been advantageous to the region’s tourism.

Naz islands are one of the attractions of Qeshm Geopark. They are located 22 kilometers off Qeshm city in south coast. These islands with their coral beds have created a very especial ecosystem for invertebrates and other aquatic animals. Every low tide detaches Naz from Qeshm Island and at high tide it is attached.

Portuguese Castle in Qeshm is another tourist attraction of Iran. Qeshm’s Portuguese Castle is a fort on the island of Qeshm constructed by the Portuguese occupying forces in the 16th century. Beyond its mighty defensive walls, there are underground canals used by the invading forces to store supplies and artillery.

The first and only crocodile park in the Middle East is in Qeshm Island!

Valley of Stars on Qeshm Island has been named after the falling of star centuries ago. It is one of the most spectacular natural sites on Qeshm Island which features a series of majestic gorges and canyons that were formed over centuries.

The Mangrove forests of Qeshm or Hara forests of Qeshm are mainly consist of Avicennia marina, aspecies that was named after the great Iranian scientist, Avicennia (or Abu-Ali Sina). The tree coverage may only be seen above the water level (salt water), while the rest ofthe tree parts are underneath the water.

Kish is a 91.5 square kilometer (35 square mile) Island about 12 miles off the coast of Iran in Persian Gulf. Generally flat, Kish has always been noted for its palm gardens. Kish Island is the third most-visited vacation destination in Southwest Asia, after Dubai and Sharm el-Sheikh.

The complex includes green space with a variety of different species of plants, bird garden, and the first and the only Dolphinarium in Iran. In this complex, different species of marine mammals, including dolphins, northern sea lion, southern sea lion, northern sea cat, dolphin and penguin are kept and tourists can watch their master strokes of those trained by Iranian instructors. A total of 21 marine mammals are kept in pools with a volume of 18,000 cubic meters filled with sea water

The kariz (or Qanat) of Kish is said to have been built about 2500 years ago by the inhabitants of Harireh city. This structure was built to collect, purify, and store water for the inhabitants of the island. As the island is situated in a region with an arid climate, this was essential for their survival. Today, it is transformed into an amazing underground city, with an area of 10000 square meters. The complex is now called Kariz-e Kish.

Other notable Iranian Islands in Persian Gulf are:

The Persian Gulf is home to over 700 species of fish, most of which are native. Of these 700 species, more than 80% are reef associated. There was considerable destruction of branching corals during a storm in 1996, anchor damage is higher in deeper water (13m), and many corals in shallower waters are damaged by uncontrolled recreational activities.

There are at least 35 coral species around Hormuz Island, with branching Acropora dominating around islands in the Gulf, as well as some soft coral (Sarcophyton) and crown-of-thorns starfish (COTs) in the northern part of the Gulf (Tunb-e-Kuchak Island). At Kish Island, 19 coral species have been identified with Acroporidae, Favidae and Poritidae most frequently and Agariciidae and Dendrophyllidae are quite rare.

The Persian Gulf is also home to many migratory and local birds.

There is great variation in color, size, and type of the bird species. Real estate development in the Persian Gulf by the United Arab Emirates and Oman also raised concerns that habitats of species such as the hawksbill turtle, greater flamingo, and booted warbler may be destroyed.

Mangrove forests are also another unique part of Persian Gulf’s wildlife. High and low-tide have been critical in shaping the mangrove forests and its related biodiversity. Mangrove forests host a variety of water birds, which, at low tide feed on the muddy intertidal zone. In fact, each bird species is well adapted to feed on very specific organisms that live at certain depths in salt water or the mud.

The day marks the anniversary of the day the Portuguese colonial forces were driven out of the Strait of Hormuz in the Capture of Ormuz in 1622. Iran designated April 30 as the National Persian Gulf Day to protect the waterway’s cultural and historical identity, which is one of the most important symbols of Iranian’s national identity.

This day highlights the fact that the waterway has been referred to by historians and ancient texts as “Persian Gulf” since the Achaemenid Empire was established in Persia (now modern Iran).

A range of events such various ceremonies all over Iran, especially in the coastal cities of the Persian Gulf, human chains around the body of water and paintings and art works are put on display to celebrate the day.

The name of the body of water separating the Iranian plateau, historically and internationally known as the Persian Gulf, after the land of Persia (Iran), has been disputed by some Arab countries since the 1960s.

Persian Gulf has been used throughout history, in maps, documents and diplomacy, from the ancient Persians, whose empire dominated the region, to the Greeks and the British.

The push to call it the false name Arabian Gulf, gathered steam during the Pan-Arab nationalist movement of the late 1950s was stirred by President Jamal Abdel Nasser of Egypt. In the 1960s, Arab countries made Arabian Gulf compulsory, and the Gulf Cooperation Council uses it.

The United Nations uses Persian Gulf. A 2006 paper by a United Nations working group found unanimity in historical documents on the term, which it said was coined by the Persian king Darioush in the fifth century B.C.

This site, like many others also seeks to preserve the history and the heritage of the Persian Gulf, and prevent eradicating Persia from history books.