Persian Dates
There are hundreds of kinds of dates in Iran. Date palms are common in warm zones of Iran. The estimated date for this cultivation is believed to be around 7,000 years ago in modern-day Iran.
0 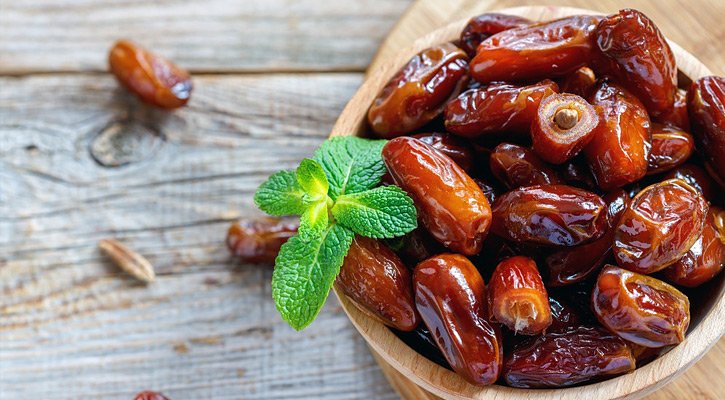 There are hundreds of kinds of dates in Iran!

Date palms are common in warm zones of Iran. The estimated date for this cultivation is believed to be around 7,000 years ago in modern-day Iran.

Dates are oval-shaped, brown or reddish-yellow, sweet fruits that grow on the date palm tree.

Dates grow on date palms in small clusters. The name date comes from the Greek word daktulos, which means fingers.

Date Palm is a tall palm tree that bears clusters of dates, native to western Asia and North Africa. The scientific name of the date palm is Phoenix dactylifera. Date Palms grow up to 75 feet and can live for 100 years. The palm trees need room to grow and spread out their roots which helps them gather surface water. There are male and female date palm trees, and only females bear fruit.

Date palm is one of the most ancient cultivated trees in the world. They originated in the regions around the Persian Gulf. Dates provided people with food for thousands of years before the palm trees were deliberately cultivated. The estimated date for this cultivation is believed to be around 7,000 years ago in modern-day Iran.

There are hundreds of kinds of dates in Iran!  Persian dates have different attributes and degree of color which each of them are used differently.

Some of the Persian dates are:

Astamaran or Samarran is a semi dry, thick and rough date. It makes up about 70% of Iranian date and 40% of Persian date export. Astamaran or Sayer is very popular in many countries such as Russia, Canada, Australia, UK and New Zealand because of its unique features such as high sugar content and low cellulose content.

Shahani dates are long with a narrow tip and the color is golden-yellow to light-brown. Its khalal is sweet, so some amount of its palm fruit is being consumed in khalal stage. These dates are late-ripening type.

Persian Kabkab dates are semi dry dates and are considered wet dates. These dates long and the color is dark brown. Kabkab dates, like Astamaran, Shahani and Mazafati have the most economic value in Iran.

Rabbi dates are one of the most popular date types. Their production is exclusive to Iran. Rabbi Date grows in Iranshahr, Zabol, Chahbahar and Saravan cities of the Sistan and Baluchestan province of Iran. Rabbi dates are soft, dark brown in color and long in size and can be kept in normal temperature of room. They have thin, meaty skin and soft texture.

Gantar dates are also known as Qantar or Ghandi in different areas. They are one of the most popular types for export from Khuzestan.

Also known as Khadrawi dates have an oval core with light brown color and the core sticks to the fruit. Khazravi dates are considered to be some of the best dates in both texture and flavor.

Dayri dates are large with thick skin surrounding the seed. The color of Dayri dates are dark brown to black. They are very tender and lack the fibrous meat that some other types of dates have. Dayri dates have a strong flavor with a hint of vanilla.

Halawi dates have a sweet honey flavor. They are long and thin and have buttery blonde colored skin. Since Halawi dates have lower than average sugar content, they are a great choice for people who have sugar sensitivity.

Barhi dates have a rich and syrupy flavor. They are one of the smallest and most fragile types of Persian dates. Barhi dates are harvested in August and early September. They have varying degree of sweetness which depends on its ripeness level, ranging from fresh sugar cane to coconut and butterscotch flavor. Barhi dates are unique in their edibility during all three stages of ripeness: yellow and semi-ripe (Khalal), amber brown and fully ripe (rutab) or dark brown dried and wrinkled (tamr).

Khassui dates is one of the best dates in Iran!

Khassui dates are harvested in the northeastern province of Bushehr. They are considered as one of the smallest varieties of Persian dates and have a long hold time. According to the species and its growth area, they are typically found in different color from golden yellow to bright brown, from pure red to dark brown and from dark red to blackish dark purple.

Mazafati or Mozafati dates are also called the Bam dates because they are grown mainly in Bam. They are also harvested in other areas in southern Iran such as Jiroft, Kahnuj (in Kerman province), Saravan, Nikshahr, Haji Abad and Iranshahr (in Sistan-o-Baluchestan province). Because of their high moisture, Mazafati dates are not used as nuts. They are considered one of the most delicious dates in the world.

Allmehtari dates are relatively small and linear. They have high economic value because they are ripening early. Originally they are grown in Hormozgan province of Iran.

Mordar Sang is one of the most famous cultivars of Kerman province and is planted in Bandar Abbas, Bam, Jask, Jiroft and Minaab. It is only used in Kerman and some southern areas of Iran.

Where Do Persian Dates Grow?

Date palms are common in warm zones of Iran!

Most of Iran’s date productions are exported to Asian countries such as India (16%) and Malaysia (11%). The most exquisite species of dates are produced in Iran and are mostly produced in the southern, southwestern and southeastern palm grooves of Iran.

A few important provinces in Iran that produce dates are:

We have different derivatives such as Diced dates or chopped dates, Date Paste (for use in the production of sweets), date syrup, date vinegar, date seed oil and more.

(How to Eat) Persian Dates

Iranians have different methods to enjoy dates. They are used for making breads, pastries and snacks. Dates are often used in Persian Cuisine. Adas polow, a famous Iranian dish is served with dates as well as raisins.

Dates are the main ingredients in many cuisines of people in southern areas of Iran: